What to do when our cat always beg for food?

It is worth considering first what the reasons for this behavior may be. (among others, it affects the metabolism of insulin and leptin).

Appetite also depends on the time of year. It increases in autumn and winter when animals accumulate fat. This dependence of the biological rhythm on the season occurs not only in outgoing cats but even in those who do not move from home. It’s something that animals and even humans inherited from their ancestors. Please note that we also eat more when it gets cold and lacking natural sunlight. With our pets it’s similar. The third, typically biological, the cause is a disease. If the animal suddenly began to feel an increased appetite, this could be the result of diabetes, for example.

It is worth being aware that there are also emotional causes. Above all, they seek pleasure. Emotionality works in this way (both for us and for cats) that we try to do everything to maintain well-being at a relatively constant, high level. So when people feel depressed, they try to improve it, for example by shopping, talking to friends, browsing Facebook or cooking something good. It’s very similar in cats. They demand food, the consumption of which gives them pleasure, by the way also providing a nice addition in the form of the presence of the owner, who transmits delicacies, and by the way something says to the cat, sometimes strokes.

Such feeding becomes a whole ritual, important for both sides. The pet meows, so the owner approaches him, strokes and scratches, reaches for the sachet, opens it, serves food, looks at the animal, accompanies him. The cat himself feels good about it, but there is also the feedback of this pleasure and his master also feels it.

Behind this way of looking for pleasure is usually just boredom. The animal suffers from a lack of other activities that usually make him happy, for example, hunting or exploring the environment. So he tries to find a replacement that is easy to reach. So, cats that do not have toys can meow with food, live in a small apartment, in which there are no vertical surfaces on which they could move or nooks and crannies into which they would look.

So what to do when the cat is constantly demanding snacks? First, check that the cause is not in his body. See a veterinarian, conduct laboratory tests, check the body’s hormonal balance. Secondly, make sure your pet has a well-chosen diet. Doesn’t he get too high-energy meals in relation to age and activity. Remember that a non-emerging cat should be fed differently, which only moves between rooms, and differently outdoor, in which case the area it traverses sometimes covers several or even several dozen hectares!

Thirdly, provide the cat with activities that will protect him from boredom. You can buy or make it yourself (many ideas can be found on YouTube) stimulating toys and gadgets that allow active food, i.e. related to hunting activity. I am thinking, for example, of snack balls, otherwise known as flavor balls, which is something like a complex ball containing a labyrinth, from which the animal must extract a treat. It is also worth providing him with everything that moves – feathers or poles on a string or paper balls that will stimulate him to hunting behavior, such as chasing, running, jerking or tearing. It is also good to enable him to explore new places, such as cabinets, suitcases, bags or boxes.

Of course, it may happen that the cat will not want to play. Despite the presence of toys, scratchers, and boxes, he will hide and not be interested in them at all. This is not normal, however, because chasing, catching or catching are natural behaviors of this animal. If he does not manifest them, it may mean that he is sick or has emotional problems – he suffers from anxiety, he experiences long-term stress.

In such a situation you have to act. For example, use Feliway pheromones that have a calming effect. Sometimes pharmacological treatment may also be needed. It is worth, however, to start with a behaviorist who will be able to find out where the problem is and how to deal with it best.

Returning, however, to just asking for food, you must be aware that underestimating the problem and overfeeding the cat will not do anything good. Not only obesity and the resulting problems with circulation or strain on the joints will threaten him. An overweight cat will not feel comfortable with him, and the resulting frustration will compensate, for example, by nervously licking his coat. This, in turn, can lead to the development of diseases or serious emotional problems. 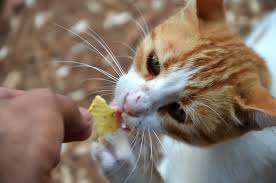